THE IMAGINARY SOUNDSCAPES is the electronic version of a meeting between STÉPHANE RIVES, who following his early 2010 solo project, Islets of Memories, uses re-worked samples from his discography, mixed with recordings from his daily life and sound environment, and FRÉDÉRIC NOGRAY, who returns to his early research on feedback, here caused and moderated in real time by three effects pedals, oscillating between minimalism and psychedelia.

A WAY OUT BY KNOWING SMILE is the first recorded collaboration between Rives and Nogray, and is released by the Ruptured label.

Saxophone player Stéphane Rives is best known for his sine wave playing of said instrument, whereas Frédéric Nogray may seem a new name. He plays effect pedals here, whereas Rives limits himself to laptop […] In his laptop Rives [disposes of] samples of his discography, which he reworks in this recording, made in June 2010 in Beirut […] The piece is divided in two parts, both called ‘A Way Out By Knowing Smile’ […] [The music seems to be] generated through improvisation, but it doesn’t actually sound like it. It’s an excellent work of low humming […] sine wave-like sounds, which are cleverly woven together into some highly sensitive, concentrated bits of music […] A fine work, I’d say, with some great intensity and sounding like an improvisation of composed materials, or perhaps a composition of improvised parts […] Great work!
(Franz de Waard in Vital Weekly) 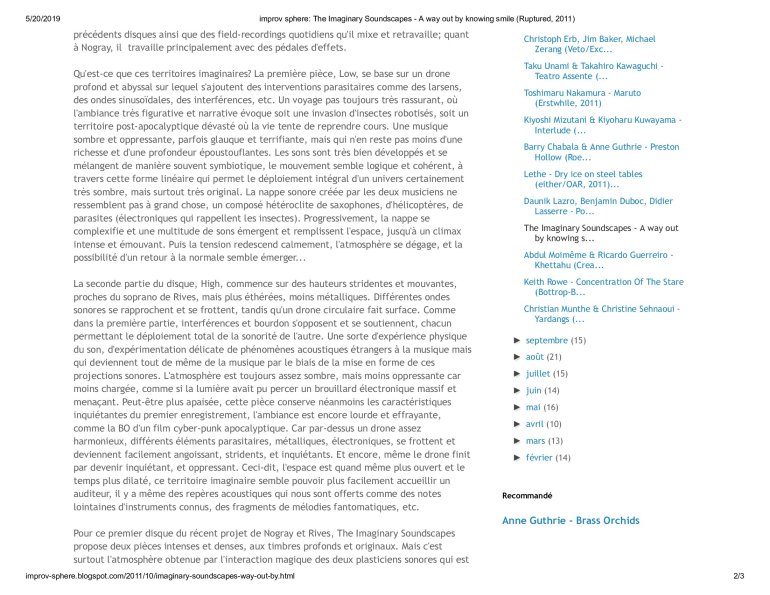