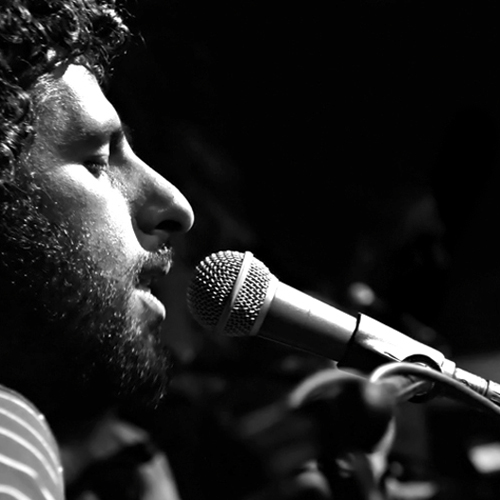 I have mixed feelings about this night. First of all, there is the slightly egocentric issue of having to mix the entire first part of the evening hidden behind a large, white drape, situated behind the band. While it made sense for Jose to play in front of a drape, it made much less sense for me to be covered by such a sundry item BEFORE the concert. Most of my friends who were there went, hey, was that you playing that night? We did not see you. Indeed.

But then, these (feelings of visual bereavement) went away when Jose Gonzalez and his two-piece band took the stage. Or rather, when he did, as he played solo at first. He strolled down shyly from the infamous VIP area at the Basement, sat on one of the three wooden chairs disposed for him, and played a couple of songs, accompanied by guitar and occasional guitar-tapping percussion. His voice was, is, well, sublime. Yes, just like the records. After a couple of songs taken from the ‘In our nature’ and ‘Veneer’ albums, he was joined onstage by a Viking-looking percussionist, and another female musician, who played a variety of miniature instruments. And alternately, hand-clapped.

Their two voices (his and hers) soared in unison (yes, it was that good) as they ripped through most of the songs on the two albums. The most notable feature of Jose’s set was his intense charisma, his way of delivering his songs as if he was playing them for the first time, right there and then, as well as his emotional guitar-playing and mastery of his instrument. Here were moments of acoustic loveliness, easily carried by the man’s incandescent voice.

I have rarely experienced such joy in an acoustic concert, such gentle beauty. Memories of Beth Gibbons playing with Rustin Man in Paris, of Martin Stephenson and Jim White alone on stage in London, sprang to mind. The crowd was subdued, which is something of an anomaly in the Basement, and allowed itself to be carried by the enchantment of Gonzalez’s small and charming ditties. A shame, then, that the concert was so short. 40, maybe 50 minutes at most? A real shame. The beauty of the musicianship on display, not to mention the slightly high price of admission, kind of left me yearning for more. The concert ended with a beautiful re-interpretation of the Bronski Beat classic-of-sorts, “Smalltown boy”. Pretty, emotional stuff.